Who ‘killed’ Dalit student? Stop howling to see the truth 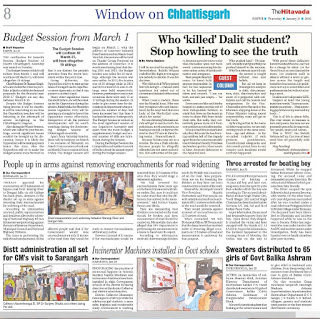 Posted at 00:00h in Columns by nisha 0 Comments
I will be accused for saying this. Nevertheless. Rohith Veluma ended his life. Right or wrong we are nobody to decide. It was his decision. Period.
Why did he do it? Who pushed him into doing it…? Indeed, valid questions but asked out of context. And debated without real reason.
When I was a student, there was the Mandal issue. Who was that youngster who self-immolated, by the way? And that Iron Lady of the North-East now, what’s her name?
No one debating Veluma’s suicide will get to see the truth. No politicians, no educationists, no media personnels, no laymen fixated to their TV sets in their living rooms… None will see it.
Because Veluma was not as a scholar. He was a Dalit scholar. Because people he allegedly offended are not mere authorities. But authorities of THE party. Because notes he wrote to the vice-chancellor were not mere words  communicating his distress rather notes of insubordination and arrogance.
Read people. Read his notes. He hasn’t held anyone responsible. In fact, he has requested to let his funeral be silent and smooth. “I am not hurt, not sad, just empty…” he wrote.
Every once a while such births happen to shake mortals out of their indisputable fiefdom. To wield that blow on the heads in order to shove the filth from inside their cells. But sadly, they collectively garner more of it from one another in such aftermaths.
Who pushed him to death and why they did so are the two burning residues left of the tragedy apart from the unsurmountable loss to Veluma’s family. Pointless and useless queries. Sheer waste of time. Absolute dishonour to the departed soul.
Who pushed him? – He himself. Literally and figuratively, he pushed himself to the extreme.
Why? Is a relevant query if only the answer is sought without bias and beliefs.
But all we hear in investigative analysis is dalit, discrimination, dalit, discrimination and more of it peppered with red-tapism and call for ousters and resignations. By the Vice-Chancellor given the sack or the Ministers stepping down or the Prime Minister taking moral responsibility, none will get to the truth.
By forcing action in the name of delivering justice, we are only stoking more of the same emotion – ego and elitism –  in the so-called ‘culprits’. If only protests, punishments, Constitutional safeguards and Acts would protect lives in our country such incidents would not have happened.
With proof these definitely haven’t worked thus far, can’t we for a change be silent. Let the News Hours across channels be mute. Let students walk in silence without a word or gesture across the length and breadth of our nation. Let politicians turn up in assemblies and parliament and sit without uttering a word.
In silence let’s all ponder LIFE. Respect at least the young man’s last words. “I have no complaints on anyone… I feel a growing gap between my soul and body…”
This is all life is about folks. The core desire in humans is love and peace, because we are primarily peaceful, loving souls. Not power, ranks and names.
This is ‘WHY’ Rohith Veluma left us. Can you at least send him off peacefully with love?
Stop howling!
Spread the love