When the husband went footloose with lady friends… I took selfies 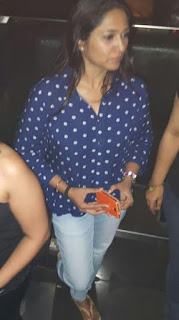 Posted at 00:00h in Blog by nisha 0 Comments
Okay, so here’s how I was stranded in the car park…
The husband’s lady friends planned to hit a pub this weekend. And I decided to tango, only because I’ve been wanting to check out Dubai’s night life since long. Now that our li’l girl is holidaying back home, I considered it the opportune time.

As run-up to the night, the frenzied WhatsApp messages made me wonder why these ladies are so excited about a pub outing. But then, they’ve been such – a bunch of lively, chirpy souls loud as only they can be. So I let him and them be. By 11.45pm, all of us [with our respective spouses] collected at the car park and began greeting one another.

One friend, in a shimmering black top standing on almost 5-inch stiletto, lips painted cherry red, gave me an up-close ‘hello’. If I felt stripped, I only had to wait for the next couple. Their men were fine. But the ladies were clearly overboard… or so I thought. Each outdoing the other figure-atively! I suddenly felt like the ugly duckling trying to fit into a quaking brood. I looked around for support… the husband was already in his elements walking ahead, even cars whizzing past seemed cockily gleaming. So I told myself, “What the heck, I’m here to see what happens inside.” And strutted ahead.
“You can’t go in”, said the security screening eager-beavers. “You need to wear closed shoes.”

I was in flats. For the life of me I can’t stand on heels, forget walking on one. Am I insane to strap myself on to one when I went to have ‘fun’? Well, one friend’s husband attempted to reason it out with the security. I don’t know what they spoke. But the security turned to me and said with more sternness than earlier, “Jeans also not allowed. It’s rules.”

Like an endangered animal I was let loose into the wild!

Honestly feeling bad for spoiling it for others, I volunteered to wait outside. I guess that did the trick. I told the officer, “I understand. Rules are rules. No worries, I’ll stay in the lobby.”
“This time, we will allow,” he said pointing to the hoarding that mentioned dress code.
Pub Rule No. 1 Learnt: No casuals.
Thus I was stamped on the wrist and allowed in…like an endangered animal inserted with a tracking chip and let loose into the wild.
The din, jarring music, smoke, lights, drinks… I saw couples molly-coddling, a few silently sipping their drinks and one in serious conversation. I envied the power of their eardrums! Not only did I turn deaf, I had lost my sensation, too. People had to tug at me to call my attention. All I felt was my heart thumping with each beat. I decided to make the most of the uncomfortable night, though.

I began video shooting. Suddenly, a fluorescent green beam of light blinded my eye. I moved to shake it off and continued, when the sharp light danced all over my face. The security personnel came over, “No taking pictures inside. Mobile off please.”

At 1:15am I stepped out into the almost-empty car park

Now what do I do? I looked around and lo! I see a tennis moment. This woman was unstrapping her sandals and she took an eternity doing so. Was she so drunk that she couldn’t find the buckle or was that a rented shoe, she wasn’t familiar with? Well, I quickly looked away. Her’s was a shame to womenfolk. And I caught two men gawking – one swallowing the smoke. Interestingly, their women were also giving them company. And, yes, I counted four girls kick their heels off before stepping on the dance floor. So much for rules!
Pub Rule No. 2 Learnt: No recording on mobiles. Capture it all in your eyes.
Well, half-an-hour into the wild, I called it quits. I left the husband with his lady friends and returned to our car and switched on the music. Ah! I can’ describe the peace I felt.
I noticed two women strategically poised, measuredly smiling to no one in particular and yet to all.

Okay, since my aim was to check out the night life, I decided to do some  research on what exactly transpires. So at 1.15am, I stepped out into the almost empty car park and strolled around at hearing distance from the two women. But when the second man who stopped by them also sneaked a look my way, I walked away and stood on the opposite pavement far away, where I could still figure out their conversation.

Racked my brains for a sensible action after an idiotic move

A little later, I noticed a person who hastily walked by, phone glued to his ear, slowing down and turning to look back. This gentleman-looking male walked back, this time slower and clearly looking at me. I ignored. He took about 15 steps and returned again, this time walking closer to the pavement I was standing on and staring at me. At that point, I thought it was better to end my night-life research and walked back to my car.
He followed and stood leaning on the car parked opposite mine. Idiot! [He or me?] Cursing myself as I racked my brains for a sensible action, my phone rang. The husband: “Did you lock the door?” Like to a child, he explained, “Lock it from the driver’s side. I’ll be there in say 20 min..”
Was it his common sense or sixth sense? But he’s an over-protective husband – at my rescue always without me having to even utter a word.
After that quick distraction, when I looked in front, I saw him walking towards me. I did miss more than a few heartbeats. But he got into the Lexus to my left and drove away. Yes, he did give me one last close look while reversing.
Well, I had to capture the night. So took a few selfies until my man came. From there  we headed to a sheesha hangout. Food and gossip followed until the wee hours!
The next morning, I was late in calling our li’l girl. “Why are you so late, mama?”
“We returned late. Had been to a pub with all aunties from Papa’s office…”
“What exactly do you do in a pub, but?” She wanted to know.
“Well darling, nothing just booze and dance and songs…” She cut me short, “So what the hell were you doing there?”
PS: If the title is misleading, then blame it on your reading!
Spread the love