When a mynah toilet-trained me 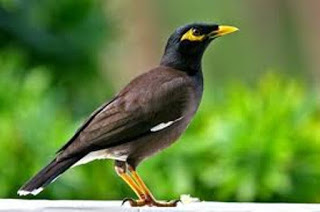 08 Nov When a mynah toilet-trained me

Posted at 00:00h in Blog by nisha 0 Comments
There was a time when my bowel movements were controlled by avians (not aliens). You read it right. Birds.
I would run to the toilet on seeing through the curtain folds of my bedroom window one coffee-coloured bird perched up on the last dish on the terrace of apartment 100 metres across the road, which in turn was 200 metres away from my bedroom.  Guess that’s the primary reason why I never cultivated the habit of consuming a fiber-rich diet. Mynahs did the needful.
Come hail or rain or sandstorm or scorching heat, from far away a distance I could identify a mynah.  One for sorrow – the phrase was etched in my subconscious that I immediately felt sad. Even if I were told a public holiday has been declared, or I don’t have to cook… if I saw a mynah I felt dejected. (By now, you would have guessed my two pet peeves).
My paranoia blew to such proportions that any object seemed like a lone mynah. Especially the water-sprinkler outlets on the pavements were all single mynahs. My heart would skip several beats and the adrenalin rush to my temples by the time I came to the exact spot and I discovered with a heaving ooof! It was just a water-sprinkler knob jutting above the soil.
Black cats have never been an issue with me. I hate felines. Guess that could be the reason when people miss trains and flights because a cat crosses their path as they set out on a journey and they return to their camps, I go ahead with my schedule and achieve as much as I intend to.
People are also touchy about ‘doubles’. A person carrying a child or a pregnant woman crossing their path is considered sure doom for the designated task. But they never riled me.
There are also paranoid souls who never return to collect anything they forget once they step out no matter how important that stuff may be. I’ve collected several items that on numerous occasions than I could care to remember. Most common being house keys and wallets. But none of those days were any different from my fully-aware days.

However, if on any of the above mentioned days had I heard a mynah cry within my earshot, I let it trigger my doom. I’ve performed badly for interviews not because I didn’t know answers to queries but I had fore-written the job/assignment was not for me because of that spiteful bird that came within my sight on my way.

The innocuous birds were literally firing the shit out of me. I never enjoyed a ride or a walk. My neck craned to spot one on the pavement or on building tops, lamp posts, traffic signals or just flying above my head.
Enough I had when the family started bickering on my alertness for the impending sorrow.
I had to tackle the fear within. I had to erase it. I had to let them be just that. Birds! The first day I saw one and told myself – ‘Whatever happens today, I will be alright. I will not let anything that happens today make me unhappy.’
Things did go wrong, and I realised it was not as bad as I expected it would be. Night came, I slept and the mynah effect erased.
A couple of days later, I saw one again and repeated the same. I survived without noticeable damage until bed time once again.
The third time I saw one, I said, ‘That is just another bird out there to fetch its worm.’
Today I enjoy my drives and walks and, yes, confidently draw my curtains open, too.
That’s all from me now…Let me Google for fiber-rich diet.
Spread the love