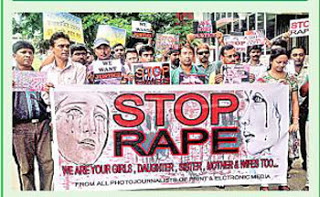 Posted at 00:00h in Columns by nisha 0 Comments
This appeared in TFW on Sept 3
Has Nirbhaya’s death gone waste? Even while she was battling for life, there were girls being tortured in the same city. There were numerous cases [imagine the numbers that went unrecorded] in the rest of the country during those weeks, when the nation saw unprecedented uprising and angst.

Then slowly the candles blew out and the lenses zoomed on other issues, until the photo-journalist was attacked.

Isn’t something wrong somewhere? The first query that rushes to mind is which rape cases make news? Is it the place, the qualification of the victim, the modus operandi, the aftermath or the number of suspects involved? There was equal hoopla about Mumbai being tarnished alongside the actual unfortunate news of the girl who was out on her duty. Such barbaric acts happen in smaller towns, too. Aren’t their lives important to be documented and fought for? Or is it the case of more the merrier – only when gangs are involved are cases dissected? Or is the professions and education of those involved that matter?
A case needs one or more of the above to qualify as news. And when it meets the entire checklist it becomes breaking news!
We need to stop sensationalising rapes.

Hooding the suspects, parading them, meeting the families of the victim, then hiding their address, and yet giving away clues…absurd. Treat them like any other suspect. How has their minute details given out at precise intervals helped stop the menace? The law needs more sprucing up. Fast track further and make the punishment more stringent.

Why should a juvenile suspect be tried differently? If they can do it then they ought to face it. Period. Whom are we fooling? What human rights are we speaking of here? When they take away the rights of unsuspecting women in the most inhuman of ways, why should they be given any levy?
Cut the bureaucracy and protocol. Assign selective power to local police to deal with rape cases within their jurisdiction. Let them hear out both the parties, investigate and file a report and take the case to the local courts and execute the verdict. There should be no appealing verdicts in such cases. Only then will punishments be quicker and sick minds be reformed. Sounds autocratic. But in some cases, to preserve democracy, we need to be stern.
Media should be hauled up as well. In the age of social media, that’s a tough call. But nothing is impossible. TRP ratings should exclude rape coverage. Can media moguls stand up for this? If they sincerely believe in what they claim to passionately cover, they will. And that will be the beginning of de-sensationalising human sufferings.
Spread the love