She never gets caught 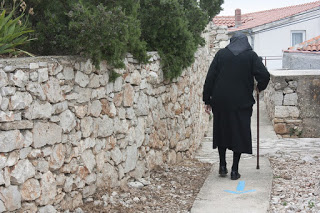 03 Aug She never gets caught

The matriarch opened the gate leaning on her walking stick, and limbed her way to the portico easy chair, which Appu, her younger brother, vacated for her.
It was daily morning routine for 75-year-old Savithri. After her breakfast, she slowly set out to her brother’s home across the street, to check on their matters.
“Tch, what a man is he to allow his daughter dress like that. And what had she done to her hair, colour it like a cock?” Savithiri scorned as she lowered into the chair.
“Whom are you talking about, akka,’ asked Appu, the newly-retired public servant, who never once cross-questioned his eldest sister. If she was wrong, he ignored and expected his family to do so. If she was grossly wrong, he taught them to forgive her. That was his way of respecting his eldest sister.

“Our nephew, who else. His wife has no sense. Shouldn’t he advice her on such matters. Vulgarity in the name of fashion. Haven’t we brought up our daughters too. And aren’t they leading decent lives now?”

“She’s a young girl; just 17 years old. Let her…” said Girija, the old woman’s sister-in-law, and swallowed the rest of the sentence, no sooner than she caught the how-dare-you-contradict-my-elder-sister look in her husband’s eyes.

“But where does his wife have the time. Now she’s begun a new thing – kitty parties. Useless and dumb women of her street gather and gossip. What all more will I have to see, O Lord, in the name of modernity!”

“What nice thing? If your heart is clean, you’ll be at peace. No amount of yoga will help if you if you only have evil in your mind. And if at all she’s doing it, I bet it’s to show she’s keeping up with the trend. Modern, you know! uh! There’s nothing like doing one’s household chores with dedication. It’s a medicine and therapy in itself — from sweeping to cooking and washing and teaching kids. It’ll keep you fit as a fiddle.”

Girija, tactfully took leave of the brother-sister duo and went to the kitchen “to clean fish, else the crows will savour them for lunch.” She squatted down on the backyard steps with an earthen vessel of fish and a knife, murmuring, “has no better work but discipline all and sundry. At this age instead of sitting at home and reading the Geetha, she’s out to gossip. Can’t tolerate anybody leading a good life…”
“What fish did you get today?”

Oh, just after my life…“It’s Tilopia, akka. Fresh catch. He gave me this vessel full for just Rs.20.”

“She’s studying, akka. Her final semester exams are round the corner.”

“Listen Girija, once a girl is married, her first priority should be to help in the kitchen. Does she plan to work, when she joins your son in Australia?”

So that’s the purpose of this morning’s visit – to take on that innocent girl.
“Where does she go early morning these days. I see her on her scooty going north.”

“Oh! She’s joined the gym here akka. She goes there in the morning.”

“Why? Why can’t she help you with house work. Sweep the garden, this courtyard. Isn’t that physical work? Spending money simply on gym. Does she even know anything? What work will she have in Australia when she joins your son? Caged in a flat.”

“Doesn’t she have the whole life to do house work, akka?”

“Well, spoil her. Don’t forget, your son will suffer,” she said and turned to leave, saying, “Let me go, it’s 11 am, a new serial has begun since yesterday. It’s good. Ahaa! it’s so difficult to cross your road now. That’ll take me another 10 minutes. I’m surely going to miss the first part.”

“Why don’t you watch it here, akka? I’ll switch on the TV for you.”

“There’s no clarity on your set.”

“Wait a minute, I’ll just wash my hands and join you,” said Girija.

Asking her husband to check the curry on the stove, she helped her elderly sister-in-law put on her slippers, and helped her cross the road to reach her home across the street, when her granddaughter came running to her with a paper kite.
“Oh, Poornima was here. When did she come?” asked Girija.
“Her father drops her here every alternate morning for two hours. Didn’t I tell you? Oh, yes I had mentioned this to Appu. Her parents have joined a fitness centre. They go thrice a week. My daughter and son-in-law are very health conscious, you know,” explained the matriarch with pride.
Uh! Shameless. Even when caught red-handed, she’s never red in the face!
What are you murmuring Girija. Talk loudly to me. I am short of hearing these days.”
“Nothing akka, wondering how age thickens our skin!”
“What! It’s so noisy here. Your home is quieter.”