Of dates and bonds 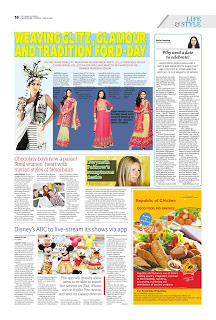 14 May Of dates and bonds

This appeared in The Financial World

Here comes more clues – the fourth Sunday of Lent; last Sunday of November; second Sunday of June; last Sunday of June; last Sunday in May; third Sunday in October; second Monday in October…
I was reminded of a school diary comprising a list of holidays, activity days and exam schedules that I’m asked to diligently sign at the beginning of the academic year.
Well, if you haven’t got it yet, then look hard. May 12 is on the list. I wouldn’t blame you, if you haven’t heard the tinkle in your head yet. Days and dates remain mere digits when they are dictated by consumerism than warmth of bonds.
On the second Sunday in the month of May, Indians along with several other nationalities chose to honour mothers.
So how did one do that? The countdown to the day saw websites galore with deals and steals to celebrate the occasion. Social media was inundated with posters and words that could have easily replaced the use of glycerine to trigger one’s tear glands.
Newspapers and magazines had their articles peppered with tips for a happy motherhood. Yes, philosophy also sells on special occasions.
I even caught a survey that urged women to follow their hearts. Apparently, 77 per cent of Indian mothers in cities such as Delhi, Mumbai, Lucknow and Hyderabad, stopped pursuing their dreams after their first child was born, according to a P&G Thank You survey.
The same study revealed 90 per cent of children motivated their mothers to pursue their dreams, and 95 per cent of them said they would like their mothers to take better care of themselves.
I’m curious to know how many among this whopping percentage of youngsters actually conveyed their wish to their moms this Sunday.
I did a quick phone survey of moms in town – both those who nurture a career and those who never felt the need to do so – to check how ‘honoured’ they felt. I discovered majority of the pre-teens gave a hand-made card to their mothers; most of the teenagers bought a card; a dismal percentage of adults rang up their moms specifically for this reason and even more miserable few gave gifts.
Then I asked my contemporaries if they ‘honoured’ their mothers, in turn. Hardly, a few! One of them quipped, “My mother’s generation does not believe in such things.”
“I called her up,” said another. “My calls make her day”.
Guys and girls, men and women, young and old! This is all that matters. No cards, gifts, dinners or exotic locales can replace those three magical words – I love You!
No time span can erase that bond. No modern-day consumerism can replace that warmth. What use are specific days and dates if the heart doesn’t stir at your voice!
Motherhood needs to be honoured and celebrated every waking moment. If you are near, give your mother a hug; if you are afar ring her up; and if she is not here, pray for her soul and say aloud. Now. ‘I love you, mom!’
Spread the love