Laugh AT me, if you can’t laugh WITH me! 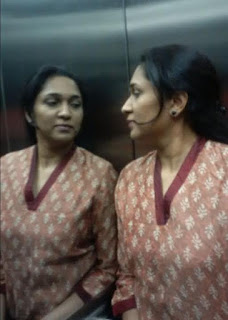 This is how you learn to smile… first at yourself!

My daughter has requested me, a plea I would like to believe… however, an ultimatum at the least. “When you write about me, at least tell me!”
Apparently I got some ‘facts’ wrong and she was confronted in school. “It’s not Thomas telling Brenda to keep her undies on. Thomas doesn’t say that…” she made her point.
I’m at fault. I can’t stand young adult fiction. Only the slang in there catches my attention. So, yes, I messed up the characters. [Am eager to know which set of parents are my readers, but she has no intention of revealing her source].
My dad has requested, a plea I would like to believe…however, an ultimatum at the least. “What all are there in this world to write about. Why write about our family!”
Apparently, some in my extended family were offended by one of my recent posts and they had an audience with him… I would like to believe, rather it was a veiled complaint at the least.
I guess my dad reacted thus as the heat got closer now, because earlier, a gentleman – I presume  – apparently cautioned my dad that “your daughter writes against Malayalis” and my dad gave two hoots.
There have been instances when my friends have taken offence to my expressions, too.
Guys, gals, friends, foes, acquaintances, relations, neighbours, strangers, my readers… The pun has [and is] always been on me!
This is no defence rather an explanation in the simplest possible words I know.
Missing the wood for the trees and pouting is like boozing and blaming the brewery when you puke. Ha… here I go yet again. Now, this is a foul-smelling simile, I admit and confess I mean no offence to anyone in general and none in particular!
This is me. Living amidst you. And so when I write it’s about me and you. If only I lived in ether, I could snort helium and make light of all egos…here I go again. Now, this is a heavy-handed allegation, I admit. But snort it out and read me again, I bet, you’ll laugh WITH me, when not AT me!
Or like my girl, have the nerve to spread out the facts! I love being defeated by my baby. Any day!!
PS: Learning to laugh at oneself is the cheapest remedy to all ills! Try it!
Spread the love