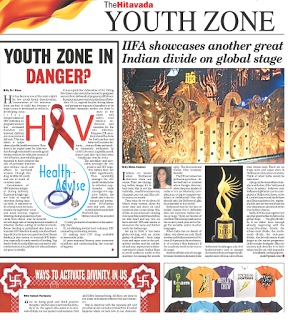 Posted at 00:00h in Columns by nisha 0 Comments
Indians cry hoarse when Hollywood directors show our slums. They are damaging India’s image; it’s in bad taste; this is not the real India…Headlines scream out, channels pan out and film critics mince no words.

Then what do we do about it? Watch those movies, shout for some time and move on until someone else comes along. But, of late, as our actors are crossing over more frequently than before, we take heart and say, ‘yes, we have arrived’! IIFA also seems to announce the same and further sooth the Indian ego.

Set up in 2000, it has been globe-trotting with an entire galaxy of glitterati  – from mega stars and super stars to the just-arrived starlets and the outdated and near-expiry ones to showcase what it claims ‘Indian’ films to world audience. Kudos to the academy for naming the awards aptly – The International Indian Film Academy Awards!

The IIFA act raises two pertinent questions – do we feel hurt or insulted when foreign directors show the poor shades of India or is it an inferiority complex in us, trying to compare ourselves to Hollywood? Else why should only the Bollywood glitz be presented to the world.

Bollywood may be the face of Indian cinema but it definitely does not represent Indian cinema at large. There are hordes of excellent films being made across the country each year, not to forget the versatile actors in other languages.

When India has no dearth of talent, why showcase only Hindi movies and Bollywood actors? It’s time IIFA presents the real mosaic of country’s film fraternity if the academy needs to be true to its name.

But that will take a lot of courage because old habits die hard. If the Bollywood bandwagon aka IIFA brainstormers care to change themselves they can begin by taking the most obvious cue out from their dream land. There are no mega stars and super stars in Hollywood. Only actors or artists. Think of what India would be sans stars!

Aping can be done either clumsily or with élan. If the ‘Bollywood Oscar Academy’ believes only Bollywood glitterati can be compared to Hollywood sheen, so be it. Let the Kapoors and Bachchans and Khans endorse a few regional picks and let the world see the true dimensions and reach of the true Indian cinema. And to begin with stop referring to regional films as the ‘poorer cousins of Bollywood’.

Sadly, IIFA is putting yet another great Indian divide on the global stage – ‘The glitz divide’! As if we didn’t have enough already. Beginning with the Aryan-Dravidian divide; the urban-rural divide; the north-south divide, the rich-poor divide…the list only seems to get longer as the nation progresses. Little wonder foreigners film our country and describe it to their whim and fly out with impunity.