I saw him… and ate his leftovers 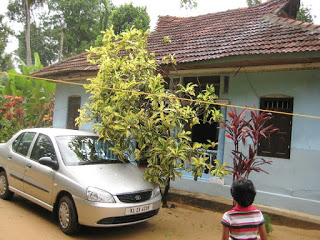 31 Jul I saw him… and ate his leftovers

Posted at 00:00h in Blog by nisha 0 Comments
Prompt:  Stranger than Fiction (Used as theme)

The veranda where I saw him years ago

My aunt, a noble, humble soul, whose middle name ought to be prayer – made hot pazham puris (banana fritters) to celebrate my visit. O! yes, she’s also the one who never tires cooking and feeding anyone who passes by her gate! No exagge…ra…tion…umm…okay, anyone who steps into her veranda.
By God! Now, you should trust me.
As I eagerly grabbed a piping hot piece off the plate, she sprung up shooing me away like she would a sly cat, “Aee,” and pulled the plate by her side.
“I didn’t offer them yet!” she hushed through rounded lips, reprimanding me. “Wait two minutes. Only two minutes, okay,” and she rushed off with the plate to the puja room, where apart from a plethora of deities there was also my grandmother, grandfather and great grand-dad garlanded, staring at us.
Decades ago, I remember so vividly, I would trail this aunt like her shadow every time we went to our mom’s ancestral home during summer holidays. She was the one who told me stories. That day, it was this aunt, who pacified a confused and frightened 8-year-old.
That morning, sitting in the backyard amid my four other aunts and grandma, listening to their talk and making paper boats, playing in the rain water, I looked up to see through the window a tall, old man in white kurta and dhothi walk past our front varenda.
I exclaimed, “Someone is at the door.” My grandmom looked up at me and returned to chopping veggies.
“He just walked there, over there,” I said pointing in the direction. None of my aunts paid me attention, either. Curiously, I steered away from the noisy group of women, walked all the way through the inner kitchen, the store room, dining hall, the winding inner corridor lined on either side by bedrooms, connecting the visitor’s room to the hall and through to the varenda.
There was nobody.
I ran back to the backyard and announced, “Nobody’s there. Where did he go.”
“Who asked you to go and see, dear,” queried my grandma. “He would have returned to the  kalerra (tomb – his resting place beside our home).”
“Wh..h..at!” Dropping the half-made paper boats off my petticoat, I ran to squat beside this aunt who was washing dishes. “I saw an old man entering our varenda. But when I went there, no one is there,” I gasped out my fright.
“Nothing to fear mole (an endearment for daughter). That’s our grandfather. He keeps walking around. He is here to protect us only, okay,” she said reassuring me, like she just did tapping the cheeks of her now adult niece, “okay, now you can have it all”.
Lost in thought as I stood wondering how my aunt has withstood the onslaught of time, unadulterated in her beliefs – I noticed a small tea cup in her hand. “Finish it all, okay.” She ordered lovingly again.
“You offered them tea, too!”
“No mole, this is payasam (rice porridge).”
I grabbed the cup from her, “I didn’t know you also made payasam.”
“Don’t have that. It won’t have any taste,” she said hurriedly taking the cup back from me. “It was offered no!”
“So”! I was now bewildered.
“They drank it no, mole. All of them had it,” she explained matter-of-factly.
“Come on, kunjamma. This is the limits.” I had to challenge her, at least now after all these years.
“Look at the level of payasam in the cup. It’s the same as you had taken it inside,” I pointed to her the dried top layer, “How can you say such ridiculous things!”
“Okay. You don’t believe me. Taste it,” she said, scooping a spoon from the cup and feeding me. “How does it taste?”
“It’s awesome. Your magic is intact,” I said honestly. She is one of the best cooks, I can vouch.
“Now, taste this,” she said giving me another spoon-full from the pan on the stove. “How is this?”
“This is hot. That was cold.” I replied.
“This is more sweet, isn’t it [the one from the pan]. Taste both again,” she forced me.
After the 5th round of tasting the payasam from the hot pan and the cold cup, I surrendered to my aunt. By God!