I like William and Kate, but love Aishwarya more 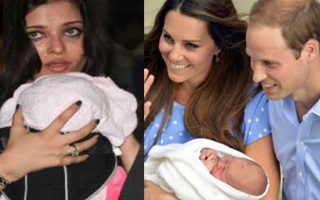 24 Jul I like William and Kate, but love Aishwarya more

Posted at 00:00h in Blog by nisha 0 Comments
So we saw the Royal baby. Kate and Williams showed their bundle to the world without ado. I went over the pictures several times to let my senses adjust to the sight and tell me, yes, I was, indeed, seeing the one-day old future King – for free, sitting on my sofa, sipping my cuppa, in my pyjamas.
Once my disoriented eyes accepted the kiddo, the coffee missed my lips on seeing the poised couple. How can they personify such grace? How can a couple of such HUMUNGOUS [hope the capitals do justice to their magnanimity] importance simply walk out of the hospital and show their baby to the world. Show the prized possession to the masses just like that! Imagine, the world got their treat without toiling. That’s not done. Their act does not honour the paranoia of the masses who labored for weeks even before the Duchess actually began experiencing it.

This is not what I am used to. This doesn’t happen in my country. The royal couple’s conduct was jarring to my desi eyes because I have no shame in admitting that I love being mesmerized by my country folks’ every act. Not common folks, please – the self-dubbed and honorary kings and queens. Our very own royalty!

The celebrity quotient I’m accustomed to is inversely proportional to media hype and diversely proportional to pedigree.
This is not how my countrymen treat their royalty. Or rather the royalty treat their compatriots. When Bollywood’s royal family went through child-birth, with equivalent hype and hoopla, they were more grounded. They used the commoner’s Twitter to connect with their well-wishers and announce that the nation has got a gorgeous beauty that could possibly bring back the Miss World crown. They executed their duty and loyalty with aplomb.

The family kept the nation waiting with waning breath and the mother wrestled to keep her so-called privacy by letting out one part each of the baby at a time. At one outing, the by-then famished fans were shown a strand of the baby’s hair; then a bracelet on the little wrist; then tiny pink booties; the tip of her nose; one startled eye; and finally the girl herself was tired of being squeezed to the famous bosom that she wriggled out.

Similar, was her christening. Every Indian was given a chance to name their favourite Bachchan’s grand-daughter. After all, don’t we have the right to do at least that for idolizing the family?  But William and Kate will not let the world take over their privilege of naming their kid. Though frenzied bets are flying around, they will settle down at Buckingham Palace shortly.

That’s definitely no justice to the zillions who eulogise them. They cannot cheat masses by snapping their joy, which they have consistently built-up since William began dating Kate, in a matter of minutes.

But, I guess, that’s Royalty! Royalty need not toil to attract followers. And, yes, privacy is, indeed, a private matter, even for public figures!