Chetan Bhagat’s dream for us 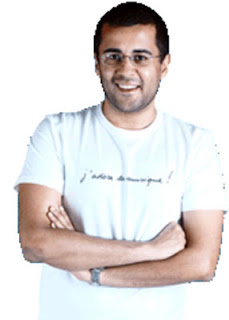 18 Sep Chetan Bhagat’s dream for us

Posted at 00:00h in Blog by nisha 0 Comments
All of us have dreams. But how many of us have dreams for our country? India’s Bollywood [script]writer has one. I’ve read all of Chetan Bhagat’s books, simply because I’m in awe at his courage to throw away a lucrative job to follow his heart. Period.

Now I salute him. He’s taken yet another risk of stepping out of his forte – fiction. Has he landed on his feet?

Well, he’s testing the waters himself. His cautiousness is glaringly evident throughout the book. He misses no opportunity to say that he is no expert of what he is speaking and that the ideas and solutions are merely his opinion. “The essays are by no means perfect; they can at times be too simple or idealistic,” he clarifies.

So somewhere within, does he feel the literary world has not accepted him? I remember watching a chat show on one of the channels where he was snubbed by the veteran Tavleen Singh. She said something on these lines… I’ve not read your books. If I remember right, he didn’t reply. I wondered, then, why he was making a mockery of himself in public.

Chetan Baghat took to writing because, he says, he has a dream for India. Sounds pompous, isn’t it? He didn’t want to be a typical “armchair NRI advisor”, he adds. Now that’s some confidence. He goes on to say that he has so much love from his readers “that other writers cannot even imagine it”. Would you call this arrogance? Well, then here’s the rest…”However, I don’t get literary praise. It’s okay…” he adds. A man with his head on his shoulders; A person who knows where he stands? Definitely!

Similarly, he’s clear about why India is in the ‘mess’ that it is. His essays on politics, society and youth clearly reflect the reasons. He believes only the youth in India can change the country if they change their mindset and elect the right people to lead the nation. Therefore, all his solutions to the various issues plaguing the country involve youth – who want love and money.

He urges the current generation to leave a country that the youth of today will be proud of. “The next generation may say this was a time of turmoil, but let them not say that we sat doing nothing.”

Corruption, education, secularism are his pet topics. To begin with, Indian education system should be revamped. It is “turning out servile, course material slaves,” he believes.

Also that India lacks community values unlike the US. He urges all to do away with caste-based politics and voting, which is the prime cause for all ills in India unlike the US. Send the right people to Parliament, he pleads.

Comparison to America at regular intervals is discomforting. Why emulate only the US? I guess, when a considerable proportion of desis still hold an American trip as the ultimate status symbol, he can be pardoned.

His desperation makes him mince no words as he bravely takes on the rich and famous. He rips apart Kingfisher, the BCCI and the real estate mafia, giving some stark calculations [the investment banker raises its head] and offering valid solutions to help the country prosper and for youth to retain faith in their homeland.

He even nudges human emotions by discussing terror attacks. But a few of his solutions to social ills are trivialized. If Bollywood movies could change over the last three decades, our mindset about serious issues can also change, he opines. I can’t digest this one.

Similarly, his take on Lerds [liberal arts students] versus nerds, and an open letter to Sonia Gandhi does not sit well with the theme of the book. And the two short stories included are way too childish, to say the least.

But that is absolutely forgivable – this is his first non-fiction work.

“What Young India Wants” is an honest book! The mention of his own suicide attempt is ample proof of his intentions. “Don’t fix history, please look at the future,” says it!

Let’s stop being typical Indians. Stop being cynical! Read the issues the book raises and his suggestions. You may agree or disagree with him, but as he says, have your own opinion.

Isn’t that the beginning of any change?